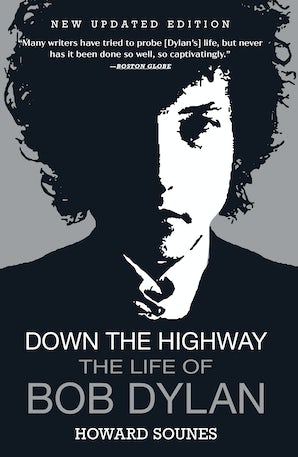 The Life of Bob Dylan

Bob Dylan is one of the most iconic figures in modern music, and for two decades, Howard Sounes’ Down the Highway has been the definitive biography of an American icon. Based on years of research, documentary evidence, and interviews with 250 of Dylan’s intimates—many exclusive—Down the Highway has gone beyond the scope of other accounts to become the most complete, authoritative biography of Bob Dylan now in print. It was praised by The Orlando Sentinel for the insights it offers to Dylan at work . . . from young upstart to grand old man of rock ‘n’ roll. . . . This book makes us realize now, while he’s still with us, how valuable he has been to our culture these last forty years.”

Sounes’s prodigious research has resulted in new insights on every aspect of Dylan’s life. He has obtained exclusive information to provide the clearest picture yet of Dylan’s 1966 motorcycle accident and subsequent “lost years” in Woodstock, New York, and he uncovered the star’s unknown second marriage. He gives inside accounts of the tours, the creation of every album and the most celebrated songs, Dylan’s labyrinthine love life, his life-threatening heart illness in 1997, and more—directly from interviews with girlfriends, family, friends, producers, concert promoters, and fellow musicians.

Howard Sounes was born in England in 1965. He has worked as a newspaper journalist in Britain and abroad. He is also the author of 27: A History of the 27 Club through the Lives of Brian Jones, Jimi Hendrix, Janis Joplin, Jim Morrison, Kurt Cobain, and Amy Winehouse, The Life of Lou Reed: Notes from the Velvet Underground, Fab: An Intimate Life of Paul McCartney, Charles Bukowski: Locked in the Arms of a Crazy Life, a history of modern men’s professional golf, and Fred & Rose, the best-selling book about the lives and crimes of mass murderers Fred and Rosemary West. He lives in London.