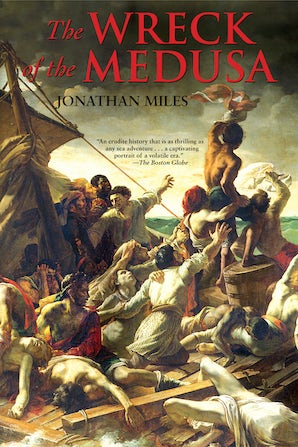 The Wreck of the Medusa

The Most Famous Sea Disaster of the Nineteenth Century

The Wreck of the Medusa is Jonathan Miles's spellbinding account of the most famous shipwreck before the Titanic. Drawing on contemporaneously published accounts and journals of survivors, Miles brilliantly reconstructs the ill-fated voyage and the events that inspired Theodore Gericault's magnificent painting The Raft of the Medusa.

In July of 1816, the French frigate Medusa, bound for the Senegalese port colony of Saint Louis under the command of an incompetent royalist captain, hit a famously treacherous reef. In the chaos that ensued, the commander and a privileged few claimed the lifeboats. The rest were herded onto a makeshift raft and set adrift. Without a compass or many provisions, hit by a vicious storm the first night and exposed to sweltering heat during the following days, the group set upon each other: mayhem, mutiny, and murder ensued. When rescue arrived thirteen days later, only fifteen were alive.

Two survivors' written account of the tragedy became an international best seller that exposed far-reaching corruption in Restoration France. The scandal inspired a young artist, Theodore Gericault, whose iconic depiction of suffering and hope won first prize at the Salon of 1819 and captivated viewers in the Louvre for centuries to come.