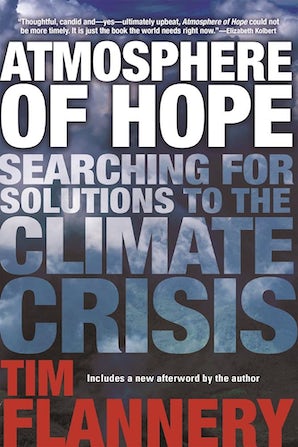 Searching for Solutions to the Climate Crisis

Leading scientist and climate writer Tim Flannery's #1 international bestseller, The Weather Makers, was one of the first books to break the topic of climate change out into the general conversation. In the ten years since, the facts of our changing climate have become widely accepted, but political leadership has not kept up. With Earth's climate system fast approaching a crisis, Flannery argues that we need to act now.

Atmospheric CO2 levels are increasing faster than at any other time in the entire recorded history of Earth. A glacier the size of Florida is sinking into the waters of Antarctica. And around the world, people are already living with the consequences of an altered climate, from demobilizing winters to deadly heatwaves.

The response to the climate crisis has been divided. Technological optimists envision geoengineering our way out of trouble with schemes like injecting light-reflecting sulfur into the stratosphere, while pessimists believe that at this point, nothing can be done—humans will have to adapt. Flannery draws on the latest science to describe a third way forward, using strategies that enhance the Earth's own systems for carbon capture and storage—from large-scale seaweed farming to the production of carbon-negative cement. If we begin investing now, third-way technologies could capture one-quarter of current global emissions by 2050. In the meantime, governments must work together to break the link between prosperity and pollution and to continue to increase the reach of alternative energies. Written with urgency but also optimism, Atmosphere of Hope is a must-read for anyone interested in our global future.

Tim Flannery is a scientist, explorer, and conservationist. He has published more than 130 scientific papers and several books, including the #1 international bestseller The Weather Makers, Throwim Way Leg, Here on Earth, and Among the Islands. He was named Australian of the Year in 2007, and from 2001 to 2013 he was Australia's Climate Commissioner.