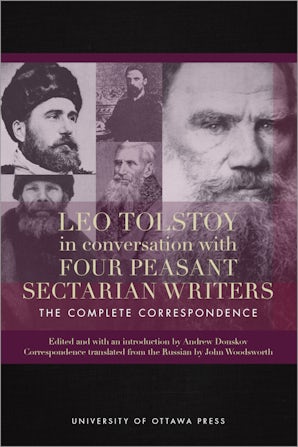 The theme of the peasantry is central throughout most of Tolstoy’s long career. His obsession with this class is seen not just as a matter of social or humanitarian concern, but as a response to the questions of “how to live a good life” and “what is the meaning of life that an inevitable death will not destroy?” questions that plagued his entire life.

The letters he exchanged with the four major peasant sectarian writers (Bondarev, Zheltov, Verigin, and Novikov) reveal not only Tolstoy as a profound thinker, but his correspondents also, as they converse on subjects concerning religious-moral questions, the meaning of life and how one should strive to find it, along with a wide array of burning social and personal problems. An analysis, and a consecutive reading of the letters (provided with extensive annotations) as a unified whole, elucidates the progressive development of the ideas they held in common (and where these diverged) and which guided Tolstoy’s and his correspondents’ lives.

The juxtaposition of Tolstoy’s letters with those of his four sectarian correspondents makes them even more significant by showing them in their original context of a dialogue, or conversation. Also, with the aim to present the conversation in an even broader context, Andrew Donskov briefly discusses Tolstoy’s relationship with peasants in general as well as with each of the four individual writers in particular. In addition, he has provided a background sketch of two major religious groups, namely the Doukhobors and Molokans, both of which still claim sizeable populations of followers in North America today.