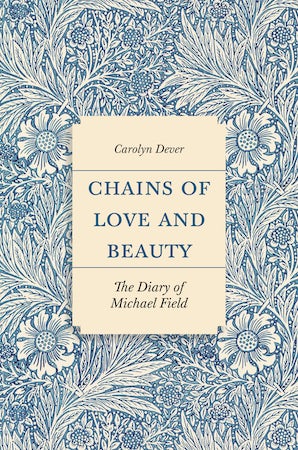 Chains of Love and Beauty

The Diary of Michael Field

Michael Field, the renowned late-Victorian poet, was well known to be the pseudonym of Katharine Bradley (1846–1914) and her niece, Edith Cooper (1862–1913). Less well known is that for three decades, the women privately maintained a romantic relationship and kept a double diary, sharing the page as they shared a bed and eventually producing a 9,500-page, twenty-nine-volume story of love, life, and art in the fin de siècle. In Chains of Love and Beauty, the first book about the diary, Carolyn Dever makes the case for this work as a great unknown “novel” of the nineteenth century and as a bridge between George Eliot and Virginia Woolf, Victorian marriage plot and modernist experimentation.

While Bradley and Cooper remained committed to publishing poetry under a single, male pseudonym, the diary, which they entitled Works and Days and hoped would be published after their deaths, allowed them to realize literary ambitions that were publicly frustrated during their lifetime. The women also used the diary, which remains largely unpublished, to negotiate their art, desires, and frustrations, as well as their relationships with contemporary literary celebrities, including Robert Browning, Oscar Wilde, William Butler Yeats, and Walter Pater.

Showing for the first time why Works and Days is a great experimental work of late-Victorian and early modernist writing, one that sheds startling new light on gender, sexuality, and authorship, Dever reveals how Bradley and Cooper wrote their shared life as art, and their art as life, on pages of intimacy that they wanted to share with the world.

Carolyn Dever is professor of English and creative writing at Dartmouth College. Her books include Skeptical Feminism and Death and the Mother from Dickens to Freud. Twitter @carolyndever