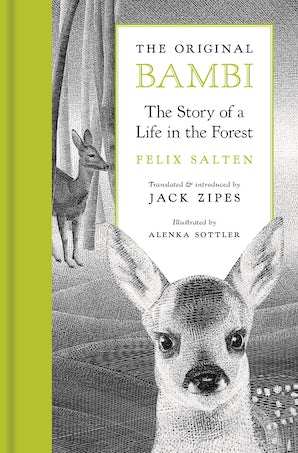 The Story of a Life in the Forest

Most of us think we know the story of Bambi—but do we? The Original Bambi is an all-new, illustrated translation of a literary classic that presents the story as it was meant to be told. For decades, readers’ images of Bambi have been shaped by the 1942 Walt Disney film—an idealized look at a fawn who represents nature’s innocence—which was based on a 1928 English translation of a novel by the Austrian Jewish writer Felix Salten. This masterful new translation gives contemporary readers a fresh perspective on this moving allegorical tale and provides important details about its creator.

Originally published in 1923, Salten’s story is more somber than the adaptations that followed it. Life in the forest is dangerous and precarious, and Bambi learns important lessons about survival as he grows to become a strong, heroic stag. Jack Zipes’s introduction traces the history of the book’s reception and explores the tensions that Salten experienced in his own life—as a hunter who also loved animals, and as an Austrian Jew who sought acceptance in Viennese society even as he faced persecution.

With captivating drawings by award-winning artist Alenka Sottler, The Original Bambi captures the emotional impact and rich meanings of a celebrated story.

Felix Salten (1869–1945) was an Austrian novelist, journalist, and critic. Jack Zipes has written, translated, and edited dozens of books, including The Original Folk and Fairy Tales of the Brothers Grimm and The Sorcerer’s Apprentice (both Princeton). He is professor emeritus of German and comparative literature at the University of Minnesota. Alenka Sottler is an award-winning painter and illustrator who lives in Ljubljana, Slovenia.