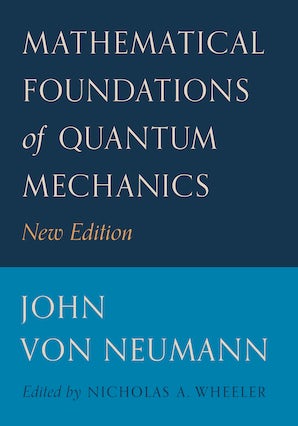 Princeton Landmarks in Mathematics and Physics

Quantum mechanics was still in its infancy in 1932 when the young John von Neumann, who would go on to become one of the greatest mathematicians of the twentieth century, published Mathematical Foundations of Quantum Mechanics--a revolutionary book that for the first time provided a rigorous mathematical framework for the new science. Robert Beyer's 1955 English translation, which von Neumann reviewed and approved, is cited more frequently today than ever before. But its many treasures and insights were too often obscured by the limitations of the way the text and equations were set on the page. In this new edition of this classic work, mathematical physicist Nicholas Wheeler has completely reset the book in TeX, making the text and equations far easier to read. He has also corrected a handful of typographic errors, revised some sentences for clarity and readability, provided an index for the first time, and added prefatory remarks drawn from the writings of Léon Van Hove and Freeman Dyson. The result brings new life to an essential work in theoretical physics and mathematics.

John von Neumann (1903–57) was one of the most important mathematicians of the twentieth century. His work included fundamental contributions to mathematics, physics, economics, and the development of the atomic bomb and the computer. He was a founding member of the Institute for Advanced Study in Princeton. Nicholas A. Wheeler is a mathematical physicist and professor emeritus of physics at Reed College.