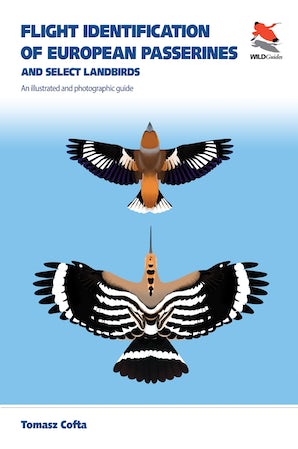 An Illustrated and Photographic Guide

A richly illustrated, state-of-the-art field guide for identifying European passerines in flight—the first of its kind

Opening up new frontiers in birdwatching, this is the first field guide to focus specifically on the identification of European passerines and related landbirds in flight. Showcasing 850 stunning and remarkably lifelike colour illustrations from acclaimed bird artist Tomasz Cofta, produced using the latest digital technology, backed up with more than 2,400 photographs carefully selected to show typical flight profiles, it provides detailed and unsurpassed coverage of 205 European passerines and 32 near-passerines. This cutting-edge book brings a new dimension to birdwatching, the concise and authoritative species accounts presenting novel yet essential information on the flight manner of individual birds and the structure and behaviour of flocks—features that are key to identification. It also includes precise transliterations of flight calls, supported by sonograms, and links to a unique collection of hundreds of online audio recordings. Beautifully designed and written in an accessible style, this book will appeal to birdwatchers of all abilities. It presents the latest knowledge on flight identification of a group of birds that is poorly covered in the literature and is therefore a must-have for all professional ornithologists and scientists involved in migration studies.

Tomasz Cofta is one of the most experienced field ornithologists in Europe, having ringed almost one hundred thousand birds of more than two hundred species (mainly passerines) in Europe, Asia and Africa. Based in Gdańsk, Poland, he is a member of the Polish Avifaunistic Commission and an acclaimed bird illustrator and author. He has published more than a hundred papers on bird identification, featuring close to two thousand of his own artworks, and has prepared thousands of other meticulously detailed illustrations of birds and other wildlife that are featured in more than sixty books, including The World's Rarest Birds (Princeton WILDGuides).