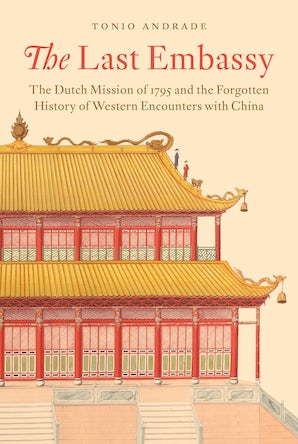 From the acclaimed author of The Gunpowder Age, a book that casts new light on the history of China and the West at the turn of the nineteenth century

George Macartney's disastrous 1793 mission to China plays a central role in the prevailing narrative of modern Sino-European relations. Summarily dismissed by the Qing court, Macartney failed in nearly all of his objectives, perhaps setting the stage for the Opium Wars of the nineteenth century and the mistrust that still marks the relationship today. But not all European encounters with China were disastrous. The Last Embassy tells the story of the Dutch mission of 1795, bringing to light a dramatic but little-known episode that transforms our understanding of the history of China and the West.

Drawing on a wealth of archival material, Tonio Andrade paints a panoramic and multifaceted portrait of an age marked by intrigues and war. China was on the brink of rebellion. In Europe, French armies were invading Holland. Enduring a harrowing voyage, the Dutch mission was to be the last European diplomatic delegation ever received in the traditional Chinese court. Andrade shows how, in contrast to the British emissaries, the Dutch were men with deep knowledge of Asia who respected regional diplomatic norms and were committed to understanding China on its own terms.

Beautifully illustrated with sketches and paintings by Chinese and European artists, The Last Embassy suggests that the Qing court, often mischaracterized as arrogant and narrow-minded, was in fact open, flexible, curious, and cosmopolitan.

Tonio Andrade is professor of Chinese and global history at Emory University. His books include The Gunpowder Age: China, Military Innovation, and the Rise of the West in World History (Princeton), Lost Colony: The Untold Story of China's First Great Victory over the West (Princeton), and How Taiwan Became Chinese: Dutch, Spanish, and Han Colonization in the Seventeenth Century. He lives in Decatur, Georgia.