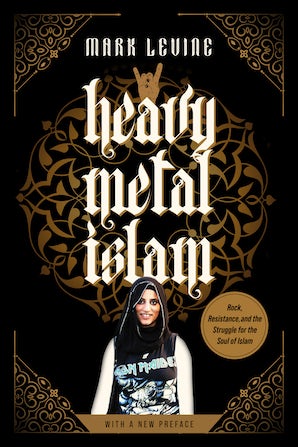 Rock, Resistance, and the Struggle for the Soul of Islam

This updated reissue of Mark LeVine’s acclaimed, revolutionary book on sub- and countercultural music in the Middle East brings this groundbreaking portrait of the region’s youth cultures to a new generation. Featuring a new preface by the author in conversation with the band The Kominas about the problematic connections between extreme music and Islam.

An eighteen-year-old Moroccan who loves Black Sabbath. A twenty-two-year-old rapper from the Gaza Strip. A young Lebanese singer who quotes Bob Marley’s “Redemption Song.” Heavy metal, punk, hip-hop, and reggae are each the music of protest, and are considered immoral by many in the Muslim world. As the young people and subcultures featured in Mark LeVine’s Heavy Metal Islam so presciently predicted, this music turned out to be the soundtrack of countercultures, uprisings, and even revolutions from Morocco to Pakistan.

In Heavy Metal Islam, originally published in 2008, Mark LeVine explores the influence of Western music on the Middle East and North Africa through interviews with musicians and fans, introducing us to young people struggling to reconcile their religion with a passion for music and a thirst for change. The result is a revealing tour de force of contemporary cultures across the Muslim majority world through the region’s evolving music scenes that only a musician, scholar, and activist with LeVine’s unique breadth of experience could narrate. A New York Times Editor’s Pick when it was first published, Heavy Metal Islam is a surprising, wildly entertaining foray into a historically authoritarian region where music reveals itself to be a true democratizing force—and a groundbreaking work of scholarship that pioneered new forms of research in the region.

Mark LeVine is a Guggenheim-winning musician who has recorded and toured with acclaimed performers, including Mick Jagger, Chuck D, Dr. John, Ozomatli, Hassan Hakmoun, Seun and Femi Kuti, and other leading Middle Eastern and African artists. His recording on Ozomatli’s album Street Signs won a Grammy in 2005. He is also Professor of Middle Eastern and African Histories at the University of California, Irvine. His many books include Twilight of Empire, coedited with Viggo Mortensen. He is also author of Overthrowing Geography and coeditor of One Land, Two States. His newest book, We’ll Play till We Die, is an expansive sequel to Heavy Metal Islam, covering the revolutionary era that began soon after this book was first published.