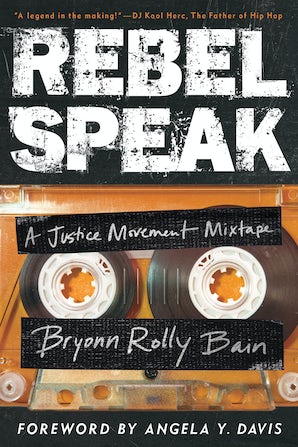 Rebel Speak sounds the alarm for a global movement to end systemic injustice led by people doing the day-to-day rebel work in the prison capital of the world. Prison activist, artist, and scholar Bryonn Rolly Bain brings us transformative oral history ciphers, rooted in the tradition of call-and-response, to lay bare the struggle and sacrifice on the front lines of the fight to abolish the prison industrial complex.

Rebel Speak investigates the motives that inspire and sustain movements for visionary change. Sparked by a life-changing interview with working-class heroes Dolores Huerta and Harry Belafonte, Bryonn invites us to join conversations with change-makers whose diverse critical perspectives and firsthand accounts expose the crisis of prisons and policing in our communities. Through dialogues with activists including Albert Woodfox, founder of the first Black Panther Party prison chapter, and Susan Burton, founder of Los Angeles's A New Way of Life Reentry Project; a conversation with a warden pushing beyond traditions at Sing Sing Correctional Facility; and an intimate exchange with his brother returning from prison, Bryonn reveals countless unseen spaces of the movement to end human caging. Sampling his provocative sessions with influential artists and culture workers, like Public Enemy leader Chuck D and radical feminist MC Maya Jupiter, Bryonn opens up and guides discussions about the power of art and activism to build solidarity across disciplines and demand justice.

With raw insight and radical introspection, Rebel Speak embodies the growing call for "credible messengers" on prisons, policing, racial justice, abolitionist politics, and transformative organizing. Reimagining the role of the writer and scholar as a DJ and MC, Bryonn moves the crowd with this unforgettable mix of those working within the belly of the beast to change the world. This is a new century's sound of movement-building and Rebel Speak.

Bryonn Rolly Bain is a prison activist, artist, scholar, and author of four books including The Ugly Side of Beautiful: Rethinking Race and Prison in America. Learn more about his critically acclaimed hip hop theater and spoken word multimedia production, Lyrics from Lockdown, and his Emmy Award–winning work on LA Stories, at www.bryonn.com.