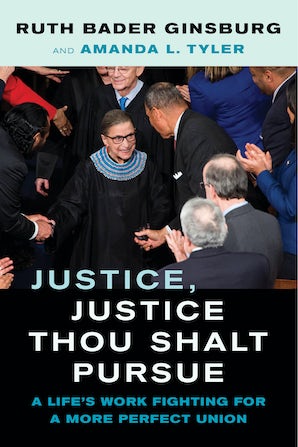 A Life's Work Fighting for a More Perfect Union

Law in the Public Square

Ruth Bader Ginsburg's last book is a curation of her own legacy, tracing the long history of her work for gender equality and a “more perfect Union.”

In the fall of 2019, Justice Ruth Bader Ginsburg visited the University of California, Berkeley School of Law to deliver the first annual Herma Hill Kay Memorial Lecture in honor of her friend, the late Herma Hill Kay, with whom Ginsburg had coauthored the very first casebook on sex-based discrimination in 1974. Justice, Justice Thou Shalt Pursue is the result of a period of collaboration between Ginsburg and Amanda L. Tyler, a Berkeley Law professor and former Ginsburg law clerk. During Justice Ginsburg's visit to Berkeley, she told her life story in conversation with Tyler. In this collection, the two bring together that conversation and other materials—many previously unpublished—that share details from Justice Ginsburg's family life and long career. These include notable briefs and oral arguments, some of Ginsburg's last speeches, and her favorite opinions that she wrote as a Supreme Court Justice (many in dissent), along with the statements that she read from the bench in those important cases. Each document was chosen by Ginsburg and Tyler to tell the story of the litigation strategy and optimistic vision that were at the heart of Ginsburg's unwavering commitment to the achievement of "a more perfect Union."

In a decades-long career, Ruth Bader Ginsburg was an advocate and jurist for gender equality and for ensuring that the United States Constitution leaves no person behind. Her work transformed not just the American legal landscape, but American society more generally. Ginsburg labored tirelessly to promote a Constitution that is ever more inclusive and that allows every individual to achieve their full human potential. As revealed in these pages, in the area of gender rights, Ginsburg dismantled long-entrenched systems of discrimination based on outdated stereotypes by showing how such laws hold back both genders. And as also shown in the materials brought together here, Justice Ginsburg had a special ability to appreciate how the decisions of the high court impact the lived experiences of everyday Americans. The passing of Justice Ruth Bader Ginsburg in September 2020 as this book was heading into production was met with a public outpouring of grief. With her death, the country lost a hero and national treasure whose incredible life and legacy made the United States a more just society and one in which “We the People,” for whom the Constitution is written, includes everyone.

Ruth Bader Ginsburg (1933–2020) was Associate Justice of the United States Supreme Court. Born in Brooklyn, New York, she received her BA from Cornell University, attended Harvard Law School, and received her LLB from Columbia Law School. From 1959 to 1961, Ginsburg served as a law clerk to the Honorable Edmund L. Palmieri, Judge of the United States District Court for the Southern District of New York. She was a professor of law at Rutgers University School of Law (1963–1972) and at Columbia Law School (1972–1980). She was appointed a judge of the United States Court of Appeals for the District of Columbia Circuit in 1980. Then-president Clinton nominated her as Associate Justice of the Supreme Court, and she took her seat on August 10, 1993. Justice Ginsburg died on September 18, 2020, as this book was going into production.

Amanda L. Tyler is Shannon Cecil Turner Professor of Law at the University of California, Berkeley School of Law, where she teaches and writes about the Supreme Court, the federal courts, constitutional law, and civil procedure. The author of many articles and several books, including Habeas Corpus in Wartime: From the Tower of London to Guantanamo Bay, Tyler also serves as a coeditor of the prominent casebook and treatise Hart and Wechsler’s The Federal Courts and the Federal System. Tyler served as a law clerk to the Honorable Ruth Bader Ginsburg at the Supreme Court of the United States during the October Term 1999.