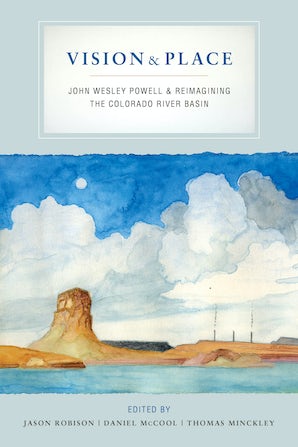 One hundred and fifty years after Powell’s epic 1869 Colorado River Exploring Expedition, this volume revisits Powell’s vision, examining its historical character and its relative influence on the Colorado River Basin’s cultural and physical landscape in modern times. In three parts, the volume unpacks Powell’s ideas on water, public lands, and Native Americans—ideas at once innovative, complex, and contradictory. With an eye toward climate change and a host of related challenges facing the basin, the volume turns to the future, reflecting on how—if at all—Powell’s legacy might inform our collective vision as we navigate a new “Great Unknown.”

Jason Robison is Professor of Law at the University of Wyoming and coauthor of Law of Water Rights and Resources.

Daniel McCool is Professor Emeritus in the Department of Political Science at the University of Utah, author of River Republic: The Fall and Rise of America's Rivers, and coauthor of Native Vote: American Indians, the Voting Rights Act, and the Right to Vote

Thomas Minckley is Professor of Geology and Geophysics at the University of Wyoming and principal organizer and leader of the 150th anniversary Powell Expedition project, the Sesquicentennial Colorado River Exploring Expedition (SCREE).