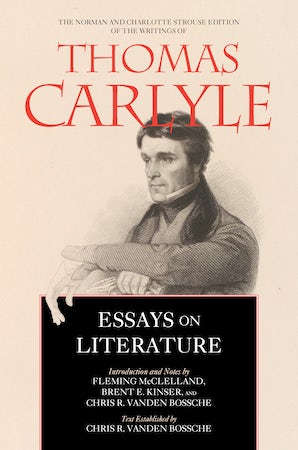 Essays on Literature brings together ten of the most important literary reviews and essays written by the acclaimed Victorian philosopher, social critic, and essayist Thomas Carlyle. Spanning his writing career, the essays allow the reader to track Carlyle's development as a reviewer and stylist, the evolution of his perennial themes, and the tremendous impact of his writing on the development of British and American literature. In keeping with the Norman and Charlotte Strouse Edition of the Writings of Thomas Carlyle, these essays are accompanied by a thorough historical introduction to the material, extensive notes providing historical and cultural context while expanding on references and allusions, and a textual apparatus that carefully details and explains the editorial decisions made in reconciling the many editions of each essay.

Thomas Carlyle (1795–1881) was a renowned and prolific Scottish essayist, historian, and social critic. His other major works include Sartor Resartus, Heroes and Hero Worship, Past and Present, and his biography of Frederick the Great.

Fleming McClelland is Professor Emeritus at the University of Louisiana at Monroe. He is a coeditor of Poems of Thomas and Jane Welsh Carlyle; a former coeditor of the Carlyle Newsletter; and the author of various scholarly articles on Carlyle and on other figures from the nineteenth century.

Brent E. Kinser is Professor of English at Western Carolina University. He is the author of The American Civil War and the Shaping of British Democracy and coeditor of Carlyle’s The French Revolution; On Heroes, Hero-Worship, and the Heroic in History; and The Collected Letters of Thomas and Jane Welsh Carlyle.

Chris R. Vanden Bossche is Professor Emeritus at the University of Notre Dame. He is the author of Carlyle and the Search for Authority and Reform Acts: Chartism, Social Agency, and the Victorian Novel, 1832–1867; editor of Carlyle’s Historical Essays; and coeditor of Past and Present.