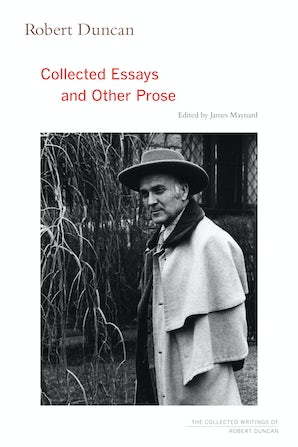 Collected Essays and Other Prose

The Collected Writings of Robert Duncan

This volume in the Collected Writings of Robert Duncan series gathers a far-reaching selection of Robert Duncan’s prose writings including most of his longer and more well-known essays along with other prose that has never been widely available. Ranging in original publication dates between 1940 and 1985, the forty-one titles reveal a great deal about Duncan’s life in poetry—including his impressions of poets whose work he admires, both contemporaries and precursors. Evocative and eclectic, this work delineates the intellectual contexts and sources of Duncan’s poetics, and opens a window onto the literary communities in which he participated.

Robert Duncan (1919-1988) was one of the major writers in the San Francisco Renaissance movement and is considered one of the most accomplished and influential of the postwar American poets. A foremost figure among the New American and Black Mountain poets, Duncan, following the death of Charles Olson, became the leading practitioner of a nontraditional open form poetry. He is the author of The Opening of the Field, Roots and Branches, and Bending the Bow, among other works.

James Maynard is Associate Curator of the Poetry Collection, University at Buffalo, and has written extensively on the work of Robert Duncan. His other editorial projects include a new edition of Duncan’s Ground Work: Before the War/In the Dark and (Re:)Working the Ground: Essays on the Late Writings of Robert Duncan.