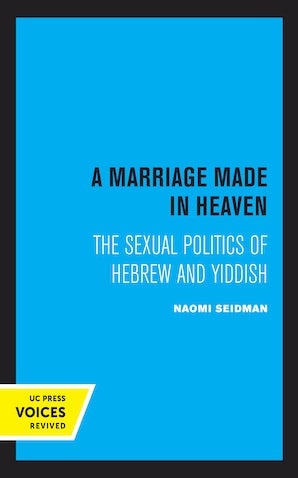 A Marriage Made in Heaven

The Sexual Politics of Hebrew and Yiddish

With remarkably original formulations, Naomi Seidman examines the ways that Hebrew, the Holy Tongue, and Yiddish, the vernacular language of Ashkenazic Jews, came to represent the masculine and feminine faces, respectively, of Ashkenazic Jewish culture. Her sophisticated history is the first book-length exploration of the sexual politics underlying the "marriage" of Hebrew and Yiddish, and it has profound implications for understanding the centrality of language choices and ideologies in the construction of modern Jewish identity.
Seidman particularly examines this sexual-linguistic system as it shaped the work of two bilingual authors, S.Y. Abramovitsh, the "grand-father" of modern Hebrew and Yiddish literature; and Dvora Baron, the first modern woman writer in Hebrew (and a writer in Yiddish as well). She also provides an analysis of the roles that Hebrew "masculinity" and Yiddish "femininity" played in the Hebrew-Yiddish language wars, the divorce that ultimately ended the marriage between the languages.
Theorists have long debated the role of mother and father in the child's relationship to language. Seidman presents the Ashkenazic case as an illuminating example of a society in which "mother tongue" and "father tongue" are clearly differentiated. Her work speaks to important issues in contemporary scholarship, including the psychoanalysis of language acquisition, the feminist critique of Zionism, and the nexus of women's studies and Yiddish literary history.
This title is part of UC Press's Voices Revived program, which commemorates University of California Press's mission to seek out and cultivate the brightest minds and give them voice, reach, and impact. Drawing on a backlist dating to 1893, Voices Revived makes high-quality, peer-reviewed scholarship accessible once again using print-on-demand technology. This title was originally published in 1997.

Naomi Seidman is Professor at the American Academy for Jewish Research and coeditor and translator of Conversations with Dvora: An Experimental Biography of the First Modern Hebrew Woman Writer.