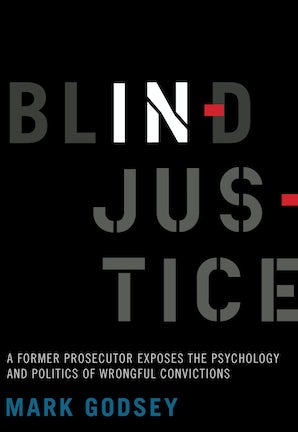 A Former Prosecutor Exposes the Psychology and Politics of Wrongful Convictions

In this unprecedented view from the trenches, prosecutor turned champion for the innocent Mark Godsey takes us inside the frailties of the human mind as they unfold in real-world wrongful convictions. Drawing upon stories from his own career, Godsey shares how innate psychological flaws in judges, police, lawyers, and juries coupled with a “tough on crime” environment can cause investigations to go awry, leading to the convictions of innocent people.

In Blind Injustice, Godsey explores distinct psychological human weaknesses inherent in the criminal justice system—confirmation bias, memory malleability, cognitive dissonance, bureaucratic denial, dehumanization, and others—and illustrates each with stories from his time as a hard-nosed prosecutor and then as an attorney for the Ohio Innocence Project.

He also lays bare the criminal justice system’s internal political pressures. How does the fact that judges, sheriffs, and prosecutors are elected officials influence how they view cases? How can defense attorneys support clients when many are overworked and underpaid? And how do juries overcome bias leading them to believe that police and expert witnesses know more than they do about what evidence means?

This book sheds a harsh light on the unintentional yet routine injustices committed by those charged with upholding justice. Yet in the end, Godsey recommends structural, procedural, and attitudinal changes aimed at restoring justice to the criminal justice system.

Mark Godsey is Professor of Law at the University of Cincinnati. He was an award-winning federal prosecutor in New York City before becoming a leading attorney and activist for the wrongfully convicted. Godsey is the co-founder of the Ohio Innocence Project, which has freed from prison 28 innocent people who collectively served more than 525 years for crimes they did not commit. Godsey frequently appears on national television and in national print media, including People, Newsweek, The New York Times, The Wall Street Journal, CNN, Dateline NBC, and Forensic Files, among others. In 2017, his career was profiled in Time.