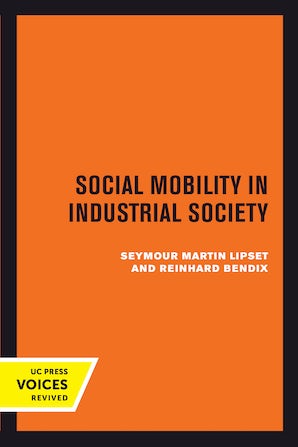 "Where else but in America," captains of industry are fond of saying, "could a penniless immigrant like Andrew Carnegie achieve so much?"
"Any place else that has reached the same stage of industrial development," is the answer implicit in Social Mobility. The authors conclude, somewhat surprisingly, that is not noticeably easier to pull oneself up by the bootstraps in the "Land of Opportunity" than it is in a number of other countries. The very process of industrialization, with its growing demands for skilled management, prevents an elite in any nation form permanently establishing itself in a position of exclusive superiority. Even in states where neither political institutions nor official ideologies favor upward mobility, increasing industrialization requires a growing--and, consequently, a changing--elite class.
The authors are concerned primarily with mobility in the total population, with movements into and out of the working class, though they report extensively on the social origins of business leaders in various countries. They deal, too, with the different values of different societies and with the motivation of the socially mobile.
Solidly based on examination of studies in more than ten languages and of raw data from unpublished works, this is the first attempt in thirty years to bring together in one volume what is known of social mobility around the world. Here is the first systematic comparison of mobility patterns in such diverse countries as Sweden and Italy, Great Britain and Japan--a comparison backed by statistics and given added meaning by discussions of the causes and consequences of mobility.
The authors analyze in detail the political implications of mobility and they explore the relationship between education and mobility. Their discussions of factors making for success or failure in school, of the role of intelligence in mobility, of the effects on children of growing up in various environments, and of the varying personalities of the mobile and non-mobile bring together the work of both psychologists and sociologists.
This title is part of UC Press's Voices Revived program, which commemorates University of California Press’s mission to seek out and cultivate the brightest minds and give them voice, reach, and impact. Drawing on a backlist dating to 1893, Voices Revived makes high-quality, peer-reviewed scholarship accessible once again using print-on-demand technology. This title was originally published in 1959.