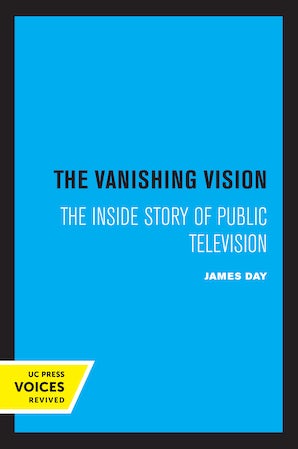 The Inside Story of Public Television

This spirited history of public television offers an insider's account of its topsy-turvy forty-year odyssey. James Day, a founder of San Francisco's KQED and a past president of New York's WNET, provides a vivid and often amusing behind-the-screens history. Day tells how a program producer, desperate to locate a family willing to live with television cameras for seven months, borrowed a dime—and a suggestion—from a blind date and telephoned the Louds of Santa Barbara. The result was the mesmerizing twelve-hour documentary An American Family. Day relates how Big Bird and his friends were created to spice up Sesame Street when test runs showed a flagging interest in the program's "live-action" segments. And he describes how Frieda Hennock, the first woman appointed to the FCC, overpowered the resistance of her male colleagues to lay the foundation for public television.

Day identifies the particular forces that have shaped public television and produced a Byzantine bureaucracy kept on a leash by an untrusting Congress, with a fragmented leadership that lacks a clearly defined mission in today's multimedia environment. Day calls for a bold rethinking of public television's mission, advocating a system that is adequately funded, independent of government, and capable of countering commercial television's "lowest-common-denominator" approach with a full range of substantive programs, comedy as well as culture, entertainment as well as information.
This title is part of UC Press's Voices Revived program, which commemorates University of California Press’s mission to seek out and cultivate the brightest minds and give them voice, reach, and impact. Drawing on a backlist dating to 1893, Voices Revived makes high-quality, peer-reviewed scholarship accessible once again using print-on-demand technology. This title was originally published in 1995.

James Day was cofounder of the public TV station KQED in San Francisco and the president of WNET in New York. He was Professor Emeritus of Television and Radio at Brooklyn College, City University of New York.