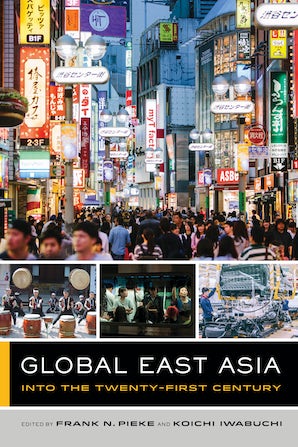 Into the Twenty-First Century

Home to a rapidly rising superpower and the two largest economies in the world after the US, a global East Asia is seen and felt everywhere. This dynamic text views the global square from the perspective of the world’s most important rising global center. East Asia’s global impact is built on a dizzying combination: a strong and deep civilizational self-consciousness fused with hypermodernity, wealth, influence, and power, which have made the region a beacon for the world and an alternative to the West.

Frank N. Pieke received his PhD in Cultural Anthropology from the University of California, Berkeley. After lectureships in Leiden and Oxford, he has served as Chair of Modern China Studies at Leiden since 2010. Between 2018 and 2020, he was the Director of the Mercator Institute for China Studies in Berlin.

Koichi Iwabuchi is Professor of Media and Cultural Studies at the School of Sociology at Kwansei Gakuin University in Japan. His recent English publications include Resilient Borders and Cultural Diversity: Internationalism, Brand Nationalism, and Multiculturalism in Japan.