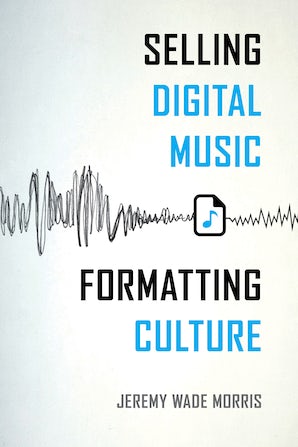 Selling Digital Music, Formatting Culture documents the transition of recorded music on CDs to music as digital files on computers. More than two decades after the first digital music files began circulating in online archives and playing through new software media players, we have yet to fully internalize the cultural and aesthetic consequences of these shifts. Tracing the emergence of what Jeremy Wade Morris calls the “digital music commodity,” Selling Digital Music, Formatting Culture considers how a conflicted assemblage of technologies, users, and industries helped reformat popular music’s meanings and uses. Through case studies of five key technologies—Winamp, metadata, Napster, iTunes, and cloud computing—this book explores how music listeners gradually came to understand computers and digital files as suitable replacements for their stereos and CD. Morris connects industrial production, popular culture, technology, and commerce in a narrative involving the aesthetics of music and computers, and the labor of producers and everyday users, as well as the value that listeners make and take from digital objects and cultural goods. Above all, Selling Digital Music, Formatting Culture is a sounding out of music’s encounters with the interfaces, metadata, and algorithms of digital culture and of why the shifting form of the music commodity matters for the music and other media we love.