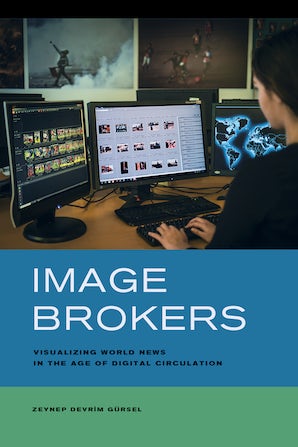 Visualizing World News in the Age of Digital Circulation

How does a photograph become a news image? An ethnography of the labor behind international news images, Image Brokers ruptures the self-evidence of the journalistic photograph by revealing the many factors determining how news audiences are shown people, events, and the world. News images, Zeynep Gürsel argues, function as formative fictions – fictional insofar as these images are constructed and culturally mediated, and formative because their public presence and circulation have real consequences in the world.

Set against the backdrop of the War on Terror and based on fieldwork conducted at photojournalism’s centers of power, Image Brokers offers an intimate look at an industry in crisis. At the turn of the 21st century, image brokers—the people who manage the distribution and restriction of news images—found the core technologies of their craft, the status of images, and their own professional standing all changing rapidly with the digitalization of the infrastructures of representation. From corporate sales meetings to wire service desks, newsrooms to photography workshops and festivals, Image Brokers investigates how news images are produced and how worldviews are reproduced in the process.