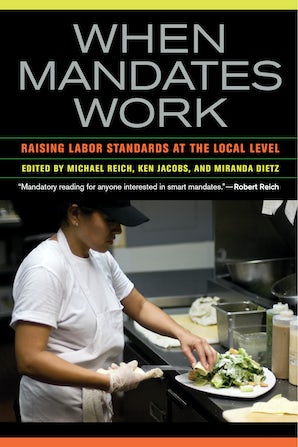 Starting in the 1990s, San Francisco launched a series of bold but relatively unknown public policy experiments to improve wages and benefits for thousands of local workers. Since then, scholars have documented the effects of those policies on compensation, productivity, job creation, and health coverage. Opponents predicted a range of negative impacts, but the evidence tells a decidedly different tale. This book brings together that evidence for the first time, reviews it as a whole, and considers its lessons for local, state, and federal policymakers.

Michael Reich is Professor of Economics and Director of the Institute for Research on Labor and Employment at UC Berkeley. His current research focuses on dynamic models of low-wage labor markets and on the economics of living wages and minimum wages. Among his recent co-edited titles are Labor in the Era of Globalization (Cambridge U.P., 2009) and Contemporary Capitalism and Its Crises: Social Structure of Accumulation Theory for the 21st Century (Cambridge U.P., 2010).

Ken Jacobs is Chair of the Center for Labor Research and Education at the University of California, Berkeley. His areas of specialization include health care coverage, the California budget, low-wage work, the retail industry, and public policy. He provided consultation to the City and County of San Francisco on the development of the San Francisco Health Care Security Ordinance and was a member of the Mayor's Universal Health Care Council.

Miranda Dietz is a researcher at the UC Berkeley Center for Labor Research and Education working on employment and health care issues in California. She has written on temporary and subcontracted work in California as well as the implementation of the Affordable Care Act. She holds a Master’s Degree in Public Policy from UC Berkeley and Bachelor’s Degree in Government from Harvard.