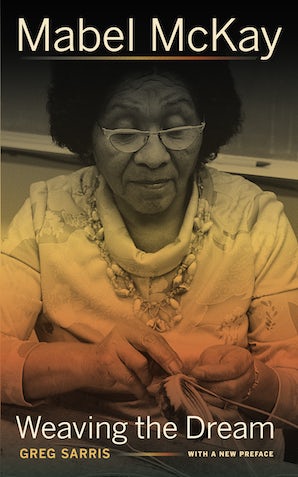 A world-renowned Pomo basket weaver and medicine woman, Mabel McKay expressed her genius through her celebrated baskets, her Dreams, her cures, and the stories with which she kept her culture alive. She spent her life teaching others how the spirit speaks through the Dream, how the spirit heals, and how the spirit demands to be heard.

Greg Sarris weaves together stories from Mabel McKay's life with an account of how he tried, and she resisted, telling her story straight—the white people's way. Sarris, an Indian of mixed-blood heritage, finds his own story in his search for Mabel McKay's. Beautifully narrated, Weaving the Dream initiates the reader into Pomo culture and demonstrates how a woman who worked most of her life in a cannery could become a great healer and an artist whose baskets were collected by the Smithsonian.

Hearing Mabel McKay's life story, we see that distinctions between material and spiritual and between mundane and magical disappear. What remains is a timeless way of healing, of making art, and of being in the world. Sarris’s new preface, written expressly for this edition, meditates on Mabel McKay’s enduring legacy and the continued importance of her teachings.

Part American Indian, Filipino, and Jewish, Greg Sarris was adopted at birth and raised in both Indian and white families. He is Chairman of the Federated Indians of Graton Rancheria and the Endowed Chair in Native American Studies at Sonoma State University. His books include Keeping Slug Woman Alive: Essays Toward a Holistic Approach to American Indian Texts (California, 1993), Watermelon Nights (1998), Grand Avenue (1994), and The Sound of Rattles and Clappers: An Anthology of California Indian Writing (1994).