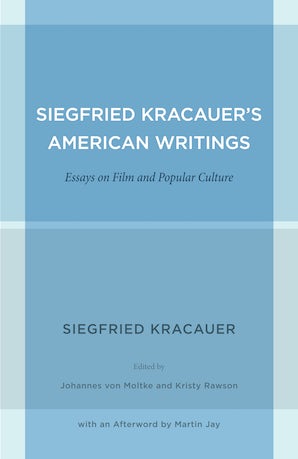 Essays on Film and Popular Culture

Siegfried Kracauer (1889–1966), friend and colleague of Walter Benjamin and Theodor Adorno, was one of the most influential film critics of the mid-twentieth century. In this book, Johannes von Moltke and Kristy Rawson have, for the first time assembled essays in cultural criticism, film, literature, and media theory that Kracauer wrote during the quarter century he spent in America after fleeing Nazi-occupied Europe. In the decades following his arrival in the United States, Kracauer commented on developments in American and European cinema, wrote on film noir and neorealism, examined unsettling political trends in mainstream cinema, and reviewed the contemporary experiments of avant-garde filmmakers. As a cultural critic, he also ranged far beyond cinema, intervening in debates regarding Jewish culture, unraveling national and racial stereotypes, and reflecting on the state of arts and humanities in the 1950s. These essays, together with the editors' introductions and an afterward by Martin Jay offer illuminating insights into the films and culture of the postwar years and provide a unique perspective on this eminent émigré intellectual.