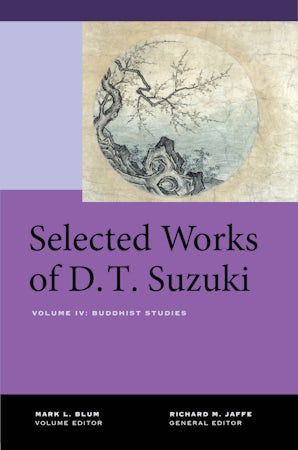 Daisetsu Teitarо̄ Suzuki was a key figure in the introduction of Buddhism to the non-Asian world. Many outside Japan encountered Buddhism for the first time through his writings and teaching, and for nearly a century his work and legacy have contributed to the ongoing religious and cultural interchange between Japan and the rest of the world, particularly the United States and Europe. This fourth volume of Selected Works of D. T. Suzuki brings together a range of Suzuki’s writings in the area of Buddhist studies. Based on his text-critical work in the Chinese canon, these essays reflect his commitment to clarifying Mahāyāna Buddhist doctrines in Indian, Chinese, and Japanese historical contexts. Many of these innovative writings reflect Buddhological discourse in contemporary Japan and the West’s pre-war ignorance of Mahāyāna thought. Included is a translation into English for the first time of his "Mahāyāna Was Not Preached by Buddha." In addition to editing the essays and contributing the translation, Mark L. Blum presents an introduction that examines how Suzuki understood Mahāyāna discourse via Chinese sources and analyzes his problematic use of Sanskrit.

Daisetsu Teitarо̄ Suzuki (1870–1966) was a Japanese-born scholar and translator who over the course of the twentieth century came to be regarded as one of the leading authorities on Zen and Buddhism generally. He was the author of more than a hundred works on the subject in both Japanese and English and was instrumental in bringing Buddhist teachings to the attention of the Western world. His many books in English include An Introduction to Zen Buddhism, Essays in Zen Buddhism, Zen and Japanese Culture, Mysticism: Christian and Buddhist, and Shin Buddhism.

Mark L. Blum is Professor of Buddhist Studies and Shinjo Ito Distinguished Chair in Japanese Studies at the University of California, Berkeley. He is translator of The Nirvana Sutra: Volume 1, author of Origins and Development of Pure Land Buddhism, and coeditor of Cultivating Spirituality and Rennyo and the Roots of Modern Japanese Buddhism.

Richard M. Jaffe is Professor of Religious Studies at Duke University and the author of Neither Monk nor Layman: Clerical Marriage in Modern Japanese Buddhism