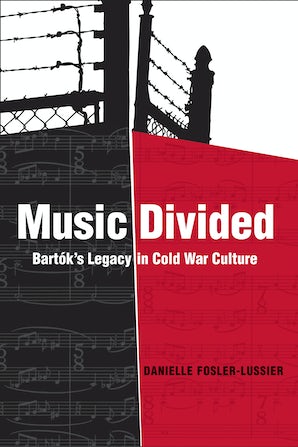 Music Divided explores how political pressures affected musical life on both sides of the iron curtain during the early years of the cold war. In this groundbreaking study, Danielle Fosler-Lussier illuminates the pervasive political anxieties of the day through particular attention to artistic, music-theoretical, and propagandistic responses to the music of Hungary’s most renowned twentieth-century composer, Béla Bartók. She shows how a tense period of political transition plagued Bartók’s music and imperiled those who took a stand on its aesthetic value in the emerging socialist state. Her fascinating investigation of Bartók’s reception outside of Hungary demonstrates that Western composers, too, formulated their ideas about musical style under the influence of ever-escalating cold war tensions.

Music Divided surveys Bartók’s role in provoking negative reactions to “accessible” music from Pierre Boulez, Hermann Scherchen, and Theodor Adorno. It considers Bartók’s influence on the youthful compositions and thinking of Bruno Maderna and Karlheinz Stockhausen, and it outlines Bartók’s legacy in the music of the Hungarian composers András Mihály, Ferenc Szabó, and Endre Szervánszky. These details reveal the impact of local and international politics on the selection of music for concert and radio programs, on composers’ choices about musical style, on government radio propaganda about music, on the development of socialist realism, and on the use of modernism as an instrument of political action.