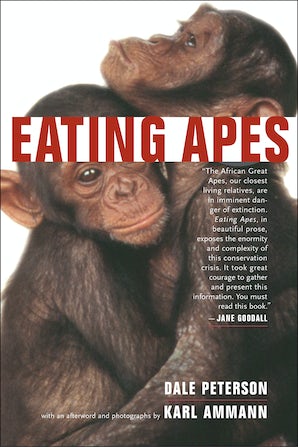 California Studies in Food and Culture

Eating Apes is an eloquent book about a disturbing secret: the looming extinction of humanity's closest relatives, the African great apes—chimpanzees, bonobos, and gorillas. Dale Peterson's impassioned exposé details how, with the unprecedented opening of African forests by European and Asian logging companies, the traditional consumption of wild animal meat in Central Africa has suddenly exploded in scope and impact, moving from what was recently a subsistence activity to an enormous and completely unsustainable commercial enterprise. Although the three African great apes account for only about one percent of the commercial bush meat trade, today's rate of slaughter could bring about their extinction in the next few decades. Supported by compelling color photographs by award-winning photographer Karl Ammann, Eating Apes documents the when, where, how, and why of this rapidly accelerating disaster.

Eating Apes persuasively argues that the American conservation media have failed to report the ongoing collapse of the ape population. In bringing the facts of this crisis and these impending extinctions into a single, accessible book, Peterson takes us one step closer to averting one of the most disturbing threats to our closest relatives.

Dale Peterson is the author of Storyville, USA (1999), Chimpanzee Travels: On and Off the Road in Africa (1995), and The Deluge and the Ark: A Journey into Primate Worlds (1989). He is the editor of Beyond Innocence: Jane Goodall's Later Life in Letters (2001) and Africa in My Blood: Jane Goodall's Early Life in Letters (2000). He is the coauthor of Demonic Males: Apes and the Origins of Human Violence (1996) and Visions of Caliban: On Chimpanzees and People (1993). Karl Ammann is an award-winning photographer who has photographed wildlife throughout Africa and Southeast Asia.