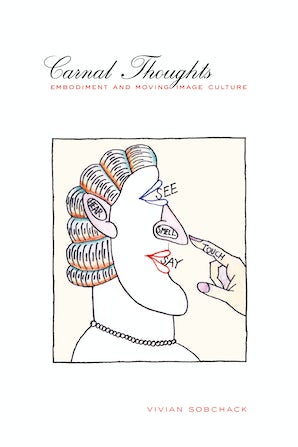 In these innovative essays, Vivian Sobchack considers the key role our bodies play in making sense of today's image-saturated culture. Emphasizing our corporeal rather than our intellectual engagements with film and other media, Carnal Thoughts shows how our experience always emerges through our senses and how our bodies are not just visible objects but also sense-making, visual subjects. Sobchack draws on both phenomenological philosophy and a broad range of popular sources to explore bodily experience in contemporary, moving-image culture. She examines how, through the conflation of cinema and surgery, we've all "had our eyes done"; why we are "moved" by the movies; and the different ways in which we inhabit photographic, cinematic, and electronic space. Carnal Thoughts provides a lively and engaging challenge to the mind/body split by demonstrating that the process of "making sense" requires an irreducible collaboration between our thoughts and our senses.

Vivian Sobchack is Professor and Associate Dean in the School of Theater, Film, and Television at the University of California, Los Angeles. She is the author of Screening Space: The American Science Fiction Film (1997) and The Address of the Eye: A Phenomenology of Film Experience (1992) and the editor of Meta-Morphing: Visual Transformation and the Culture of Quick Change (2000) and The Persistence of History: Cinema, Television, and the Modern Event (1996), among other books.