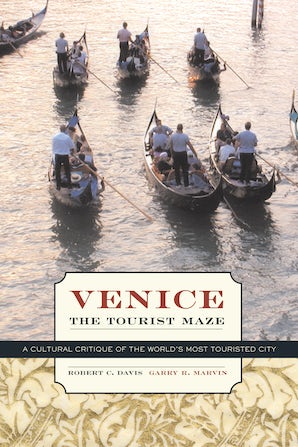 A Cultural Critique of the World's Most Touristed City

"The tourist Venice is Venice," Mary McCarthy once observed—a sentiment very much in line with what most of the fourteen million tourists who visit the city each year experience, but at the same time a painful reality for the 65,000 Venetians who actually live there. Venice is viewed from a new perspective in this engaging book, which offers a heady, one-city tour of tourism itself. Conducting readers from the beginnings of Venetian tourism in the late Middle Ages to its emergence as a form of mass entertainment in our time, the authors explore what happens when today's "industrial tourism" collides with an ancient and ever-more-fragile culture. Giving equal consideration to those who tour Venice and those who live there, their book affords rare insight into just what it is that the touring and the toured see, experience, and elicit from each other.

Robert C. Davis is Professor of Italian History at Ohio State University. He is the coeditor of The Jews of Early Modern Venice (2001) and Gender and Society in Renaissance Italy (1998) and the author of Christian Slaves, Muslim Masters (2003), The War of the Fists (1994), and Shipbuilders of the Venetian Arsenal (1991). Garry R. Marvin is Reader in Social Anthropology at the University of Surrey Roehampton. His books include Bullfight (1994), Coping with Spain (1990), and, with Bob Mullan, Zoo Culture (1998).