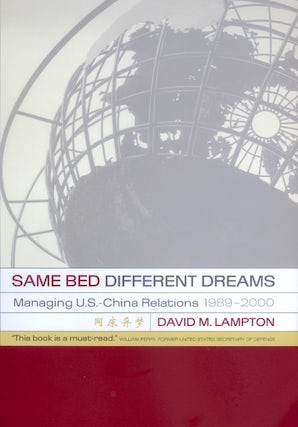 The title of this unique insider's look at a crucial decade of Sino-American interchange derives from a Chinese expression that describes a relationship of two people whose lives are intimately intertwined but who do not fundamentally communicate with each other. David M. Lampton, former president of the National Committee on U.S.-China Relations, demonstrates that while the United States and China have enormous interests at stake in their bilateral relationship, neither has been particularly deft in dealing with the other. His fascinating account shows how the processes of globalization, along with the development of international regimes and multilateral organizations, have brought America and China increasingly close in the global bed. At the same time, their respective national institutions, interests, popular perceptions, and the very characters of their two peoples, assure that the nations continue to have substantially different dreams.

Lampton explores the reasons why the Sino-American relationship is so difficult for both nations to manage and suggests ways it can be more effectively conducted in the future. His unique experience in China—nearly thirty years as a scholar, as the head of a policy-oriented exchange organization, and as director of Washington think-tank research programs—enabled him to spend extended periods with Chinese leaders and see them as they encountered America, as well as to observe U.S. leaders as they tried to come to grips with Chinese circumstances. Among many other key events, Lampton witnessed firsthand the aftermath of Tiananmen Square, successive congressional battles over most-favored-nation tariff treatment, the end of the Bush era and the rocky beginning of the Clinton administration, the death of Deng Xiaoping and Jiang Zemin's transition to power, the reversion of Hong Kong to Chinese sovereignty, and the Asian financial crisis that unfolded from mid-1997 to the end of the decade.

Lampton's careful documentary research is supplemented by interviews and accounts of his personal interaction throughout the period with leaders and key players in Washington, Beijing, Taipei, and Hong Kong. The book thus represents a singular combination of historical research, policy analysis, and personal observation, and offers guidance for those in both America and China who must shape this critical relationship in the twenty-first century.