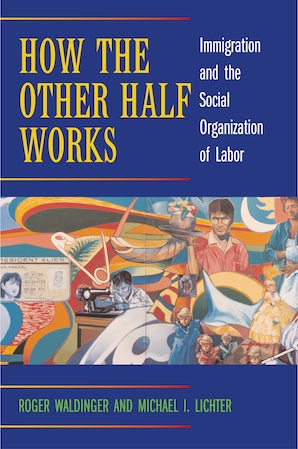 How the Other Half Works

Immigration and the Social Organization of Labor

By Roger Waldinger and Michael I. Lichter

How the Other Half Works solves the riddle of America's contemporary immigration puzzle: why an increasingly high-tech society has use for so many immigrants who lack the basic skills that today's economy seems to demand. In clear and engaging style, Waldinger and Lichter isolate the key factors that explain the presence of unskilled immigrants in our midst. Focusing on Los Angeles, the capital of today's immigrant America, this hard-hitting book elucidates the other side of the new economy, showing that hiring is finding not so much "one's own kind" but rather the "right kind" to fit the demeaning, but indispensable, jobs many American workers disdain.

Roger Waldinger is Professor and Chair of the Department of Sociology at the University of California, Los Angeles. He is author of Still the Promised City? African-Americans and New Immigrants in Post-industrial New York (1996), which won the Robert Park Award of the American Sociological Association, editor of Strangers at the Gates: New Immigrants in Urban America (California, 2001), and author of several other publications. Michael I. Lichter is Assistant Professor of Sociology, State University of New York at Buffalo.