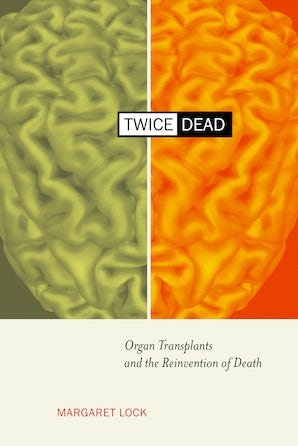 Organ Transplants and the Reinvention of Death

Tales about organ transplants appear in mythology and folk stories, and surface in documents from medieval times, but only during the past twenty years has medical knowledge and technology been sufficiently advanced for surgeons to perform thousands of transplants each year. In the majority of cases individuals diagnosed as "brain dead" are the source of the organs without which transplants could not take place. In this compelling and provocative examination, Margaret Lock traces the discourse over the past thirty years that contributed to the locating of a new criterion of death in the brain, and its routinization in clinical practice in North America. She compares this situation with that in Japan where, despite the availability of the necessary technology and expertise, brain death was legally recognized only in 1997, and then under limited and contested circumstances. Twice Dead explores the cultural, historical, political, and clinical reasons for the ready acceptance of the new criterion of death in North America and its rejection, until recently, in Japan, with the result that organ transplantation has been severely restricted in that country. This incisive and timely discussion demonstrates that death is not self-evident, that the space between life and death is historically and culturally constructed, fluid, multiple, and open to dispute.

In addition to an analysis of that professional literature on and popular representations of the subject, Lock draws on extensive interviews conducted over ten years with physicians working in intensive care units, transplant surgeons, organ recipients, donor families, members of the general public in both Japan and North America, and political activists in Japan opposed to the recognition of brain death. By showing that death can never be understood merely as a biological event, and that cultural, medical, legal, and political dimensions are inevitably implicated in the invention of brain death, Twice Dead confronts one of the most troubling questions of our era.

Margaret Lock is Professor of Anthropology at McGill University and author of the award-winning Encounters with Aging: Mythologies of Menopause in Japan and North America (1993) and East Asian Medicine in Urban Japan: Varieties of Medical Experience(1980), both from California. Among the books she has coedited are Remaking a World (2001), Social Suffering (1997), and Knowledge, Power, and Practice(1993), all from California. In December 2003, she was awarded the Robert B. Textor and Family Prize for Excellence in Anticipatory Anthropology, of the American Anthropology Association.