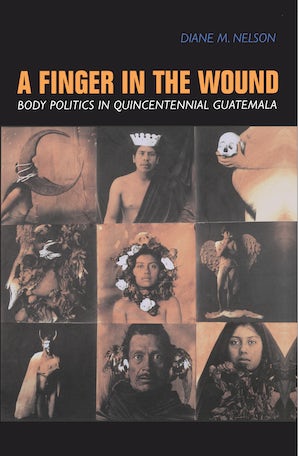 A Finger in the Wound

Many Guatemalans speak of Mayan indigenous organizing as "a finger in the wound." Diane Nelson explores the implications of this painfully graphic metaphor in her far-reaching study of the civil war and its aftermath. Why use a body metaphor? What body is wounded, and how does it react to apparent further torture? If this is the condition of the body politic, how do human bodies relate to it—those literally wounded in thirty-five years of war and those locked in the equivocal embrace of sexual conquest, domestic labor, mestizaje, and social change movements?

Supported by three and a half years of fieldwork since 1985, Nelson addresses these questions—along with the jokes, ambivalences, and structures of desire that surround them—in both concrete and theoretical terms. She explores the relations among Mayan cultural rights activists, ladino (nonindigenous) Guatemalans, the state as a site of struggle, and transnational forces including Nobel Peace Prizes, UN Conventions, neo-liberal economics, global TV, and gringo anthropologists. Along with indigenous claims and their effect on current attempts at reconstituting civilian authority after decades of military rule, Nelson investigates the notion of Quincentennial Guatemala, which has given focus to the overarching question of Mayan—and Guatemalan—identity. Her work draws from political economy, cultural studies, and psychoanalysis, and has special relevance to ongoing discussions of power, hegemony, and the production of subject positions, as well as gender issues and histories of violence as they relate to postcolonial nation-state formation.

Diane M. Nelson is Assistant Professor of Anthropology at Lewis and Clark College.