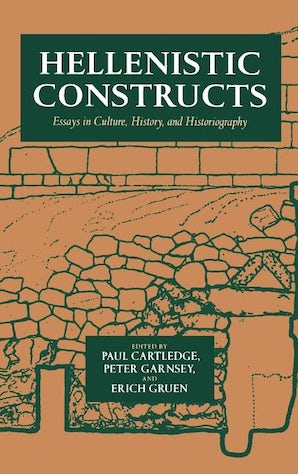 Essays in Culture, History, and Historiography

The Hellenistic period (approximately the last three centuries B.C.), with its cultural complexities and enduring legacies, retains a lasting fascination today. Reflecting the vigor and productivity of scholarship directed at this period in the past decade, this collection of original essays is a wide-ranging exploration of current discoveries and questions. The twelve essays emphasize the cultural interaction of Greek and non-Greek societies in the Hellenistic period, in contrast to more conventional focuses on politics, society, or economy. The result of original research by some of the leading scholars in Hellenistic history and culture, this volume is an exemplary illustration of the cultural richness of this period.

Paul Cartledge's introduction contains an illuminating introductory overview of current trends in Hellenistic scholarship. The essays themselves range over broad questions of comparative historiography, literature, religion, and the roles of Athens, Rome, and the Jews within the context of the Hellenistic world. The volume is dedicated to Frank Walbank and includes an updated bibliography of his work which has been essential to our understanding of the Hellenistic period.

Paul Cartledge is Reader in Greek History, University of Cambridge. He is the coauthor, with A.J.S. Spawforth, of Hellenistic and Roman Sparta: A Tale of Two Cities (1989) and The Greeks: A Portrait of Self and Others (revised edition, 1997). Peter Garnsey is Professor of Ancient History at the University of Cambridge. His works include Famine and Food Supply in the Graeco-Roman World: Responses to Risk and Crisis (1988) and Ideas of Slavery from Aristotle to Augustine (1996). Erich Gruen is Professor of History and Classics at the University of California, Berkeley. His publications include The Hellenistic World and the Coming of Rome (California, 1984), and Heritage and Hellenism: The Reinvention of Jewish Tradition (California).