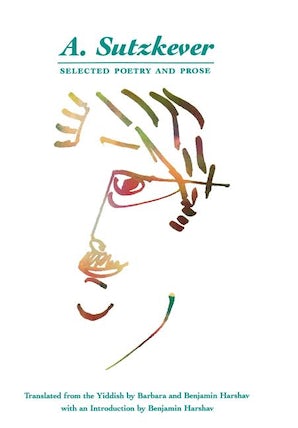 The work of A. Sutzkever, one of the major twentieth-century masters of verse and the last of the great Yiddish poets, is presented to the English reader in this banquet of poetry, narrative verse, and poetic fiction. Sutzkever's imposing body of work links images from Israel's present and past with the extinction of the Jews of Europe and with deeply personal reflection on human existence.

In Sutzkever's poetry the Yiddish language attains a refinement, richness of sound, and complexity of meaning unknown before. His poetry has been translated into many languages, but this is the most comprehensive presentation of his work in English. Benjamin Harshav provides a biography of the poet and a critical assessment of his writings in the context of his times. The illustrations were originally created for Sutzkever's work by such artists as Marc Chagall, Yosl Bergner, Mane-Katz, Yankl Adler, and Reuven Rubin.

A. Sutzkever was born in 1913 and spent his early years in Siberia. He grew up in Vilna, Lithuania, the Jewish cultural capital of Eastern Europe, and when the Nazi occupation caught him in the Vilna Ghetto he worked vigorously to save valuable manuscipts and cultural treasures. Joining the partisans in the forest, he was smuggled out to Moscow, where he told the world about the extinction and resistance of the Jews. He arrived in Israel in 1947, before the state was created, and founded Di Goldene Keyt, the preeminent international Yiddish literary quarterly, which he edits to this day. Barbara Harshav is Senior Associate Editor of The Tel Aviv Review and a prolific translator from Hebrew, French, German, and Yiddish into English. Benjamin Harshav is Jacob and Hilda Blaustein Professsor of Hebrew and Comparative Literature at Yale University and former Director of the Porter Institute for Poetics and Semiotics at Tel Aviv University. The Harshavs were responsible for the highly praised American Yiddish Poetry: A Bilingual Anthology (California 1986).