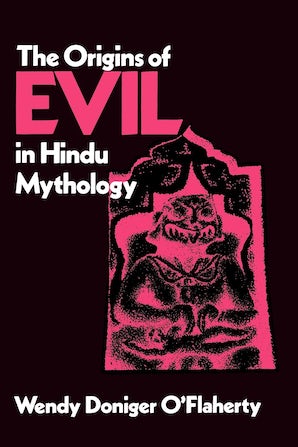 The Origins of Evil in Hindu Mythology

Hermeneutics: Studies in the History of Religions

"While focusing on the central problem of evil, O'Fiaherty illuminates every aspect of Hindu thought."
--Choice
"This is Dr. O'Flaherty's third book on Indian mythology, and the best yet. The range and number of myths handled is dazzling .... Moreover, her fluent and lucid style make reading a pleasure .... a major contribution to the study of religion in general and Hinduism in particular."
--Times Literary Supplement
"This scholarly work is a welcome and valuable addition to Hindu studies because it corrects the widespread belief that Hindu thought does not recognize the problem of evil. The author shows conclusively that the mythology of tribal societies and the Puranas deal with this question extensively. She traces certain conceptual attitudes towards evil from the Vedic period to the present day."
--Library Journal
"O'Flaherty has accomplished an important double task. She has reoriented our thinking on the Indian experience of evil as it has been given literary expression in the mythological texts of the Sanskrit tradition and to a lesser extent in the Tamil and tribal traditions as well. She has also provided, in this rich and exquisitely crafted book, a new set of vantage points from which to re-read familiar Indian myths and encounter new ones. . . Origins is both a superb piece of scholarship and a lively, witty and engagingly written book."
--South Asia in Review
"The author performs a brilliant feat in her textually exegetical and hermeneutical handling of the numerous and many-faceted myths. The study is highly pertinent and valuable . . . The authorial translations from the Hindu and Pali texts are refreshing ... and her comments are illuminating. Thus the Hindu view of evil comes out as something not simplistic and arbitrary but as an approach which is careful, complex, and richly eclectic. . . . This is a highly readable volume written with verve, sparkle and occasional light touches of decent humor."
--Asian Student
"For serious students of mythology, theology and Hinduism, this book is must reading."
--Religious Studies Review

Wendy Doniger O'Flaherty is a scholar of Sanskrit and Indian textual traditions, her major works include, Asceticism and Eroticism in the Mythology of Siva; Hindu Myths: A Sourcebook; The Origins of Evil in Hindu Mythology; Women, Androgynes, and Other Mythical Beasts; and The Rig Veda: An Anthology, 108 Hymns Translated from the Sanskrit. She is the Mircea Eliade Distinguished Service Professor of History of Religions at the University of Chicago and was president of the Association for Asian Studies in 1998.