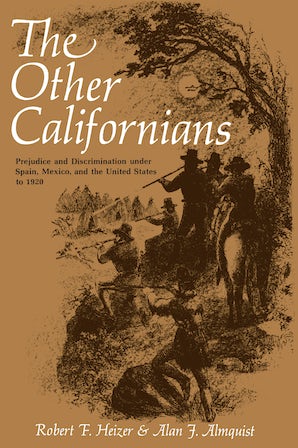 Prejudice and Discrimination under Spain, Mexico, and the United States to 1920

About the Second Printing:
The authors have taken the opportunity presented by the second printing of this book to make a very few changes in the text. We became conscious, after the book was published, of occasionally imposing on the reader our own emotional reactions, and it is these subjective expressions which we have modified or deleted.
A collection of 168 documents in the form of official letters from military personnel, Indian Agents, and unsigned articles in California newspapers dating from 1847 to 1865 dealing with the treatment of California Indians will be published shortly by the Peregrine Press of Santa Barbara. These documents will provide some of the original material which was used in writing The Other Californians and may, therefore, be looked on as a companion volume.
From the Preface to the first printing:
It is the authors' hope to provide in this book a social history of non-Anglo ethnic groups in California's past as illustrated by attitudes of prejudice and acts of discrimination directed against these groups. Historians have been aware that racial prejudice was displayed by California whites, but in general they have treated the subject as though it was an unimportant one, perhaps because race prejudice in the last century was not always considered inhumane in the collective conscience of Americans.
We have drawn our information from many sources, and we have quoted liberally in the belief that the wording of the original accounts illustrate the atmosphere of the times much more objectively and forcefully than anyone could describe it. Long documents have not been incorporated into the text, but have been collected at the end in a separate section.

Robert Fleming Heizer (July 13, 1915 – July 18, 1979) was an archaeologist who conducted extensive fieldwork and reporting in California, the Southwestern United States, and the Great Basin.