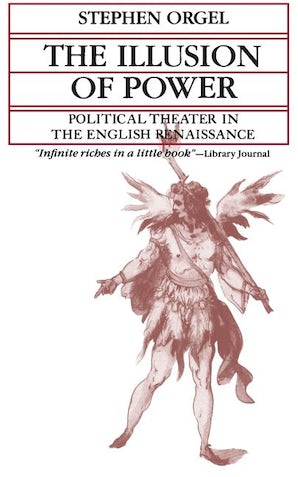 The Illusion of Power

Political Theater in the English Renaissance

"Elegant, deeply learned, and intellectually adventurous, its implications extend far beyond the boundaries of the Stuart and Caroline masque. It is an indispensable, exploration of political art and aestheticized politics. . . . a classic."
--Stephen Greenblatt, University of California, Berkeley
"A triumph of scholarship, insight, and explication, Oregel's book is truly a classic in the field of Renaissance studies. Anyone interested in Renaissance culture will find here a masterful analysis of its celebration of royal power."
--Coppelia Kahn, Brown University
"As knowing of art, theatrical and political history as it is sensitive to poetry, Orgel's book is learned, lively, and beautifully clear."
--John Hollander, Yale University
"A foundational text for the New Historicist Perspective in English Renaissance literary and cultural studies . . . as informative and suggestive as it was when new; in the clarity and grace of its writing, the breadth and precision of its arguments, the aptness and resonance of its examples, it is unsurpassed as an introduction to the dialectic of theatrical illusion and state authority--of play and power--in the culture of Elizabethan and Stuart England."
--Louis Montrose, University of California, San Diego