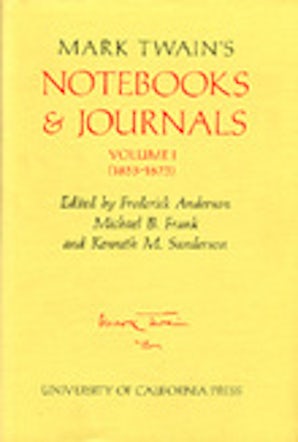 In the summer of 1855, when the nineteen-year-old Sam Clements traveled from Saint Louis to Hannibal, Paris, and Florida, Missouri, and then to Keokuk, Iowa, he carried with him a notebook in which he entered French lessons, phrenological information, miscellaneous observations, and reminders about errands to be performed. This first notebook thus took the random form which would characterize most of those to follow.
About the text: In order to avoid editorial misrepresentation and to preserve the texture of autograph documents, the entries are presented in their original, often unfinished, form with most of Clemens' irregularities, inconsistencies, errors, and cancellations unchanged. Clemens' cancellations are included in the text enclosed in angle brackets, thus