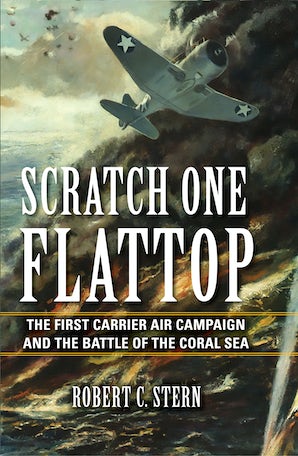 By the beginning of May 1942, five months after the Pearl Harbor attack, the US Navy was ready to challenge the Japanese moves in the South Pacific. When the Japanese sent troops to New Guinea and the Solomon Islands, the Americans sent the carriers Lexington and Yorktown to counter the move, setting the stage for the Battle of the Coral Sea.

In Scratch One Flattop: The First Carrier Air Campaign and the Battle of the Coral Sea, historian Robert C. Stern analyzes the Battle of the Coral Sea, the first major fleet engagement where the warships were never in sight of each other. Unlike the Battle of Midway, the Battle of the Coral Sea has received remarkably little study. Stern covers not only the action of the ships and their air groups but also describes the impact of this pivotal engagement. His analysis looks at the short-term impact as well as the long-term implications, including the installation of inert gas fuel-system purging on all American aircraft carriers and the push to integrate sensor systems with fighter direction to better protect against enemy aircraft.

The essential text on the first carrier air campaign, Scratch One Flattop is a landmark study on an overlooked battle in the first months of the United States' engagement in World War II.

Robert C. Stern has been writing about 20th-century naval history for more than 35 years. Among his books are The US Navy and the War in Europe (2012), Fire from the Sky: Surviving the Kamikaze Threat (2010), Destroyer Battles: Epics of Naval Close Combat (2008) and The Hunter Hunted: Submarine versus Submarine Encounters from World War I to the Present (2007).