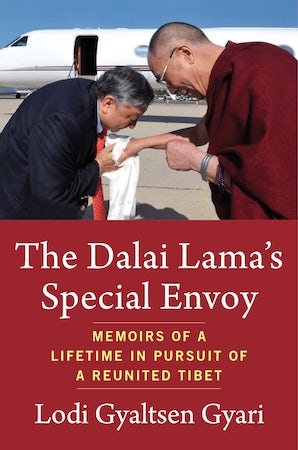 Memoirs of a Lifetime in Pursuit of a Reunited Tibet

Lodi Gyaltsen Gyari spent decades drawing attention to the plight of the Tibetan people and striving for resolution of the Tibetan-Chinese conflict. He was the Dalai Lama’s Special Envoy and chief negotiator with the People’s Republic of China in the formal negotiations over the status of Tibet. In this revealing memoir, Gyari chronicles his lifetime of service to the Dalai Lama and the Tibetan cause.

Gyari recounts his work conducting formal dialogue with the Chinese leadership from 2002 to 2012, as well as his efforts during the many years of quiet diplomacy preceding these historic negotiations. He details the fits and starts of the parties’ relationship, addressing successes as well as failures and highlighting misperceptions, missteps, and missed opportunities by both sides. Gyari grounds his recollections of his time as Special Envoy in his life experience, providing a powerful account of the personal side of Tibet’s struggles. He describes the Tibetan resistance to the Chinese invasion and the tumultuous early years of the Tibetan community in exile as well as his family’s history and spiritual lineage. A reincarnated Tibetan Buddhist lama forced to flee Tibet during the Chinese invasion, Gyari illuminates how his political efforts fulfilled his spiritual calling.

Informed by his unparalleled experiences, Gyari offers realizable—but provocative—recommendations for restarting the Tibetan-Chinese dialogue to achieve a mutually beneficial resolution of the issue. For all readers interested in Tibet’s complex modern history, this book offers an incomparable look inside the decades-long effort to achieve the Dalai Lama’s vision of a reunited Tibet.

Lodi Gyaltsen Gyari (1949–2018) spent nearly five decades in both governmental and nongovernmental positions working to garner international support for the Tibetan cause and resolve the Tibetan-Chinese conflict. He was the Special Envoy of His Holiness the 14th Dalai Lama and led nine rounds of negotiations with the People’s Republic of China. Gyari was also a president and executive chair of the International Campaign for Tibet.