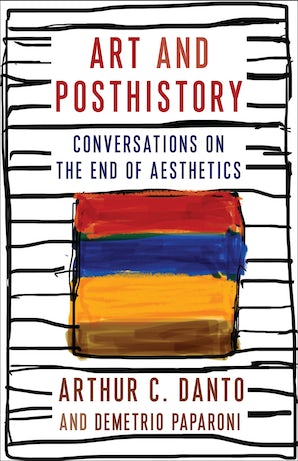 Conversations on the End of Aesthetics

Columbia Themes in Philosophy, Social Criticism, and the Arts

From the 1990s until just before his death, the legendary art critic and philosopher Arthur C. Danto carried out extended conversations about contemporary art with the prominent Italian critic Demetrio Paparoni. Their discussions ranged widely over a vast range of topics, from American pop art and minimalism to abstraction and appropriationism. Yet they continually returned to the concepts at the core of Danto’s thinking—posthistory and the end of aesthetics—provocative notions that to this day shape questions about the meaning and future of contemporary art.

Art and Posthistory presents these rich dialogues and correspondence, testifying to the ongoing importance of Danto’s ideas. It offers readers the opportunity to experience the intellectual excitement of Danto in person, speculating in a freewheeling yet erudite style. Danto and Paparoni discuss figures such as Andy Warhol, Marcel Duchamp, Franz Kline, Sean Scully, Clement Greenberg, Cindy Sherman, and Wang Guangyi, offering both insightful comments on individual works and sweeping observations about wider issues. On occasion, the artist Mimmo Paladino and the philosopher Mario Perniola join the conversation, enlivening the discussion and adding their own perspectives.

The book also features an introductory essay by Paparoni that provides lucid analysis of Danto’s thinking, emphasizing where the two disagree as well as what they learned from each other.

Arthur C. Danto (1924–2013) was Johnsonian Professor of Philosophy Emeritus at Columbia University and the longtime art critic for the Nation. His Columbia University Press books include Nietzsche as Philosopher, Narration and Knowledge, and The Philosophical Disenfranchisement of Art. Perhaps the most influential philosopher of art of the second half of the twentieth century, Danto is acclaimed for developing the concept of the “artworld” and for seeing in the work of Warhol and others the “end of art.”

Demetrio Paparoni is a critic, curator, and writer who has taught at the University of Catania. He is the art critic of the Italian newspaper Domani. Paparoni founded the magazine Tema Celeste and the publishing house of the same name, and he has curated a number of major exhibitions. His previous books include The Devil: A Visual History (2019).

Barry Schwabsky is the art critic for the Nation.