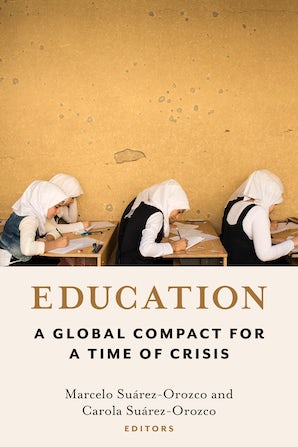 A Global Compact for a Time of Crisis

In an age of catastrophes—unchecked climate change, extreme poverty, forced migrations, war, and terror, all compounded by the COVID-19 pandemic—how can schooling be reengineered and education reimagined? This book calls for a new global approach to education that responds to these overlapping crises in order to enrich and enhance the lives of children everywhere.

Marcelo Suárez-Orozco and Carola Suárez-Orozco convene scholars and practitioners from a range of disciplines—including anthropology, neuroscience, demography, psychology, child development, sociology, and economics— who offer incisive essays on the global state of education. Contributors consider how educational policy and practice can foster social inclusion and improve outcomes for all children. They emphasize the centrality of education to social and environmental justice, as well as the philosophical foundations of education and its centrality to human flourishing, personal dignity, and sustainable development. Chapters examine topics such as the neuroscience of education; the uses of technology to engage children who are not reached by traditional schooling; education for climate change; the education of immigrants, refugees, and the forcibly displaced; and how to address and mitigate the effects of inequality and xenophobia in the classroom. Global and interdisciplinary, Education speaks directly to urgent contemporary challenges.

Marcelo Suárez-Orozco is chancellor of the University of Massachusetts Boston. He previously served as the inaugural Wasserman Dean of the School of Education and Information Studies at the University of California, Los Angeles. He is the author or editor of numerous books and articles on cultural psychology and psychological anthropology, with an emphasis on education, globalization, and migration.

Carola Suárez-Orozco is distinguished professor of counseling and school psychology at the University of Massachusetts Boston and former codirector of the Institute for Immigration, Globalization, and Education at the University of California, Los Angeles. Her most recent book is Immigrant-Origin Students in Community College: Navigating Risk and Reward in Higher Education, coedited with Olivia Osei-Twumasi (2019).

The Suárez-Orozcos are the cofounders of Re-imagining Migration. Their previous coauthored books include Learning a New Land: Immigrant Students in American Society, with Irina Todorova (2008).