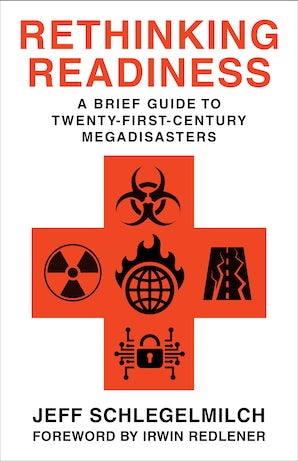 A Brief Guide to Twenty-First-Century Megadisasters

As human society continues to develop, we have increased the risk of large-scale disasters. From health care to infrastructure to national security, systems designed to keep us safe have also heightened the potential for catastrophe. The constant pressure of climate change, geopolitical conflict, and our tendency to ignore what is hard to grasp exacerbates potential dangers. How can we prepare for and prevent the twenty-first-century disasters on the horizon?

Rethinking Readiness offers an expert introduction to human-made threats and vulnerabilities, with a focus on opportunities to reimagine how we approach disaster preparedness. Jeff Schlegelmilch identifies and explores the most critical threats facing the world today, detailing the dangers of pandemics, climate change, infrastructure collapse, cyberattacks, and nuclear conflict. Drawing on the latest research from leading experts, he provides an accessible overview of the causes and potential effects of these looming megadisasters. The book highlights the potential for building resilient, adaptable, and sustainable systems so that we can be better prepared to respond to and recover from future crises. Thoroughly grounded in scientific and policy expertise, Rethinking Readiness is an essential guide to this century’s biggest challenges in disaster management.

Jeff Schlegelmilch is the deputy director of the National Center for Disaster Preparedness at Columbia University’s Earth Institute. He previously worked for the Yale New Haven Health System Center for Emergency Preparedness and Disaster Response and the Boston Public Health Commission.

Irwin Redlener is the director and founder of the National Center for Disaster Preparedness at the Earth Institute. He is also a professor at the Mailman School of Public Health and the Vagelos College of Physicians and Surgeons at Columbia University and president emeritus and cofounder of the Children’s Health Fund. His books include The Future of Us: What the Dreams of Children Mean for Twenty-First-Century America (Columbia, 2017).