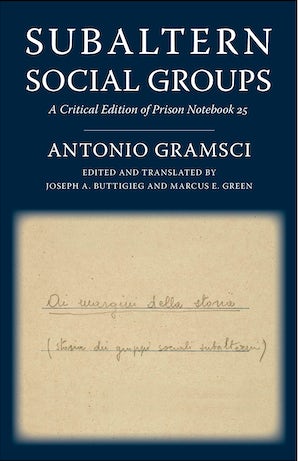 A Critical Edition of Prison Notebook 25

By Antonio Gramsci Edited by Joseph A. Buttigieg and Marcus E. Green

Antonio Gramsci is widely celebrated as the most original political thinker in Western Marxism. Among the most central aspects of his enduring intellectual legacy is the concept of subalternity. Developed in the work of scholars such as Gayatri Spivak and Ranajit Guha, subalternity has been extraordinarily influential across fields of inquiry stretching from cultural studies, literary theory, and postcolonial criticism to anthropology, sociology, criminology, and disability studies. Almost every author whose work touches upon subalterns alludes to Gramsci’s formulation of the concept. Yet Gramsci’s original writings on the topic have not yet appeared in full in English.

Among his prison notebooks, Gramsci devoted a single notebook to the theme of subaltern social groups. Notebook 25, which he entitled “On the Margins of History (History of Subaltern Social Groups),” contains a series of observations on subaltern groups from ancient Rome and medieval communes to the period after the Italian Risorgimento, in addition to discussions of the state, intellectuals, the methodological criteria of historical analysis, and reflections on utopias and philosophical novels. This volume presents the first complete translation of Gramsci’s notes on the topic. In addition to a comprehensive translation of Notebook 25 along with Gramsci’s first draft and related notes on subaltern groups, it includes a critical apparatus that clarifies Gramsci’s history, culture, and sources and contextualizes these ideas against his earlier writings and letters. Subaltern Social Groups is an indispensable account of the development of one of the crucial concepts in twentieth-century thought.

Antonio Gramsci (1891–1937) was an Italian Marxist theorist, one-time leader of the Italian Communist Party, and founder of the official party newspaper, l’Unita. Arrested and imprisoned by the Italian Fascist regime in 1926, Gramsci died before fully regaining his freedom. Gramsci’s thirty-three prison notebooks, which contain brilliant reflections on a vast range of subjects, are foundational for an array of disciplines and schools of thought.

Joseph A. Buttigieg (1947–2019) was professor emeritus of English at the University of Notre Dame. He was the author and editor of a number of books, most notably the complete critical edition of Antonio Gramsci’s Prison Notebooks (Columbia, 1992–2007). He was also the founding member and president of the International Gramsci Society.

Marcus E. Green teaches political science at Pasadena City College. He has published several articles focusing on Antonio Gramsci’s political thought and subalternity. He is editor of the anthology Rethinking Gramsci (2011) and was coeditor of the journal Rethinking Marxism. He serves as secretary of the International Gramsci Society.