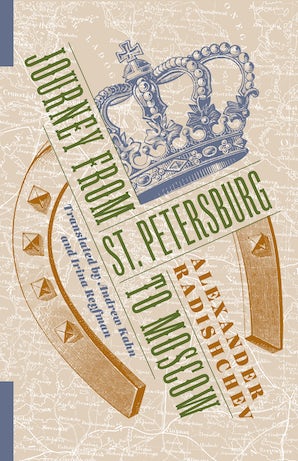 Journey from St. Petersburg to Moscow

Translated by Irina Reyfman and Andrew Kahn By Alexander Radishchev

Alexander Radishchev’s Journey from St. Petersburg to Moscow is among the most important pieces of writing to come out of Russia in the age of Catherine the Great. An account of a fictional journey along a postal route, it blends literature, philosophy, and political economy to expose social and economic injustices and their causes at all levels of Russian society. Not long after the book’s publication in 1790, Radishchev was condemned to death for its radicalism and ultimately exiled to Siberia instead.

Radishchev’s literary journey is guided by intense moral conviction. He sought to confront the reader with urgent ethical questions, laying bare the cruelty of serfdom and other institutionalized forms of exploitation. The Journey’s multiple strands include sentimental fictions, allegorical discourses, poetry, theatrical plots, historical essays, a treatise on raising children, and comments on corruption and political economy, all informed by Enlightenment arguments and an interest in placing Russia in its European context. Radishchev is perhaps the first in a long line of Russian writer-dissenters such as Herzen and Solzhenitsyn who created a singular literary idiom to express a subversive message. In Andrew Kahn and Irina Reyfman’s idiomatic and stylistically sensitive translation, one of imperial Russia’s most notorious clandestine books is now accessible to English-speaking readers.

Alexander Radishchev was born in 1749 to a minor noble family and began writing verse and prose in the 1780s. In 1790, after the publication of Journey from St. Petersburg to Moscow caused an uproar, he was arrested and sentenced to death before being exiled to Siberia. Tsar Paul allowed him to return, and Alexander I pardoned him and appointed him to the Commission for Drafting of New Laws. Radishchev committed suicide in 1802.

Andrew Kahn is professor of Russian literature at the University of Oxford and a fellow of St Edmund Hall, Oxford.

Irina Reyfman is professor of Russian literature in the Department of Slavic Languages at Columbia University.