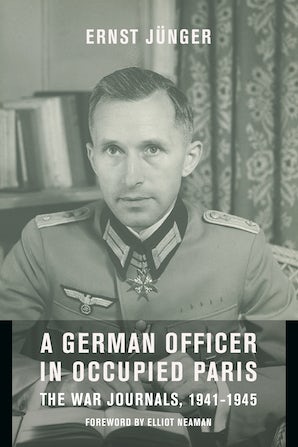 A German Officer in Occupied Paris

Ernst Jünger was one of twentieth-century Germany’s most important—and most controversial—writers. Decorated for bravery in World War I and the author of the acclaimed western front memoir Storm of Steel, he frankly depicted war’s horrors even as he extolled its glories. As a Wehrmacht captain during World War II, Jünger faithfully kept a journal in occupied Paris and continued to write on the eastern front and in Germany until its defeat—writings that are of major historical and literary significance.

Jünger’s Paris journals document his Francophile excitement, romantic affairs, and fascination with botany and entomology, alongside mystical and religious ruminations and trenchant observations on the occupation and the politics of collaboration. While working as a mail censor, he led the privileged life of an officer, encountering artists such as Céline, Cocteau, Braque, and Picasso. His notes from the Caucasus depict the chaos after Stalingrad and atrocities on the eastern front. Upon returning to Paris, Jünger observed the French resistance and was close to the German military conspirators who plotted to assassinate Hitler in 1944. After fleeing France, he reunited with his family as Germany’s capitulation approached. Both participant and commentator, close to the horrors of history but often distancing himself from them, Jünger turned his life and experiences into a work of art. These wartime journals appear here in English for the first time, giving fresh insights into the quandaries of the twentieth century from the keen pen of a paradoxical observer.

Ernst Jünger (1895–1998) was a major figure in twentieth-century German literature and intellectual life. He was a young leader of right-wing nationalism in the Weimar Republic. Among his many works is the novel On the Marble Cliffs, a symbolic criticism of totalitarianism written under the Third Reich.

Elliot Neaman is professor of history at the University of San Francisco and the author of A Dubious Past: Ernst Jünger and the Politics of Literature after Nazism (1999).

Thomas Hansen, a longtime member of the Wellesley College German Department, is a translator from the German.

Abby Hansen is a translator of German literary and nonfiction texts.