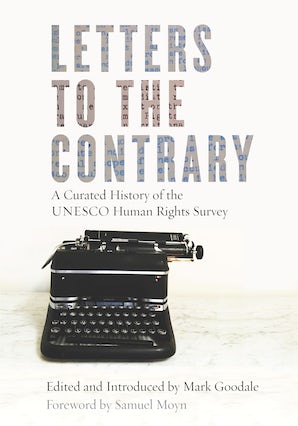 Letters to the Contrary

A Curated History of the UNESCO Human Rights Survey

Since its adoption in 1948, historians and human rights scholars have claimed that the Universal Declaration of Human Rights was influenced by UNESCO's 1947–48 global survey of intellectuals, theologians, and cultural and political leaders, that supposedly demonstrated a truly universal consensus on human rights. Based on meticulous archival research, Letters to the Contrary provides a curated history of the UNESCO human rights survey and demonstrates its relevance to contemporary debates over the origins, legitimacy, and universality of human rights. In collecting, annotating, and analyzing these responses, including letters and responses that were omitted and polite refusals to respond, Mark Goodale shows that the UNESCO human rights survey was much less than supposed, but also much more. In many ways, the intellectual struggles, moral questions, and ideological doubts among the different participants who both organized and responded to the survey reveal a strikingly critical and contemporary orientation, raising similar questions at the center of current debates surrounding human rights scholarship and practice.

Mark Goodale is Professor of Cultural and Social Anthropology at the University of Lausanne and Series Editor of Stanford Studies in Human Rights. The author or editor of 12 other volumes, his most recent book is Anthropology and Law: A Critical Introduction (2017).